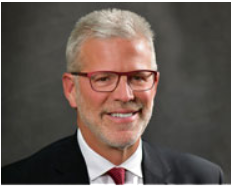 Duane Mayes, Director for the Department of Labor and Workforce Development, Division of Vocational Rehabilitation, began his career in social services just out of high school when he took a job in a nursing home.  He found he loved the work, perhaps because he and his two siblings already had experience caring for their father, who had significant physical disabilities from polio.  Also, both his parents are deaf.  Mayes is fluent in American Sign Language, his first language.
Mayes went on to get a bachelor’s and master’s degree in vocational rehabilitation from the University of Wisconsin Stout graduating in 1982.  Mayes moved to Alaska in 1982, where he worked for many years with the Alaska Division of Vocational Rehabilitation.  He has 40 years of vocational rehabilitation experience, eight in the private sector and four as the owner of his own business.  He went on to work for three years as the Operations Director with the Governor's Council on Disabilities and Special Education and then assumed the position of Division Director from 2010 to 2018 for Senior and Disabilities Services with the Alaska Department of Health & Social Services.  Two years ago, Mayes made the decision to come back to the Alaska Division of Vocational Rehabilitation and is often saying this is where he truly belongs.  “Assisting Alaskans with disabilities in obtaining competitive and integrated employment is my passion.”
Mayes has conducted multiple presentations nationally, regionally, and locally on effective & genuine leadership.  Through his 40 years of leading, he firmly believes you are only as good as the people around you. Mayes will be presenting at the Youth Professional Summit on effective and genuine leadership and looks forward to the next generation of leaders making a difference for the great state of Alaska!