Engineering Technology students at UW-Stout were invited on a tour of Andersen Corporation in Menomonie on Friday, March 8. Arranged by Engineering Technology (ET) Program Director Monika Herrmann, the tour was led by Colin Nevin, Performance Engineer at Andersen’s Menomonie plant, and Scott Bowe, Technology Manager at the company headquarters in Bayport and ET Advisory Board member.

Both Nevin and Bowe are UW-Stout alumni with their B.S. in Manufacturing Engineering.

Bowe at Stout, Then and Now

Bowe has always been very technical, wanting to find hands-on solutions and understand how things are put together, how they operate. When he began his search for a degree, he thought he might attend Dunwoody College of Technology to become an electrician.

“Then I saw the Manufacturing Engineering program at UW-Stout,” he said. “I grew up in New Richmond, so Stout was well-known to me. It had the hands-on experiences and labs I wanted. Now, I’m biased for Stout. There was never a time that I wasn’t glad I went to Stout.”

Bowe graduated in 2000 and now serves on UW-Stout’s Engineering Technology Advisory Board. He joined the board because he enjoys helping people and wants to help prepare students for what they want in their careers.

“The school understands what the industry wants from students, and the industry realizes the experience Stout students have,” Bowe explained. “So, the Engineering Technology Advisory Board is driven by an industry-focused dialogue: what do we want to improve and add to the program to prepare our students?”

Bowe brings his own knowledge and experience to the advisory board. As a Technology Manager, some of Bowe’s tasks include investigating, piloting and implementing new technologies and improving existing technologies.

“I also help in creating and maintaining a highly qualified technical team that support our enterprise projects and goals,” he said.

Knowing the impact companies have on industry and the pace at which technology changes, Bowe can give the board an idea of industry situations, and their perspective of students entering the engineering field.

The Culture and Philosophy of Andersen Corporation

Andersen Corporation practices many philosophies. The company vision is “To make the world a better place by living up to the promise that everyone benefits from their association with Andersen”.

Bowe has been at Andersen Corporation for 15 years and chose the company for similar reasons as he chose Stout. To him, his alma mater and his employer stand out above the rest.

He appreciates Andersen Corporation’s philosophies and its philanthropic practices in its local communities. These are attractive aspects for many new employees on any career path, and also helps retain good employees.

“We do what we need to do as a company,” Bowe said. “But we always have our customers and communities in mind. We ask, ‘How can we be more customer-oriented to make what our customers want?’”

Between 10-15 years ago, during the recession, the corporation found itself asking this question.

“A lot of change was driven by the recession,” Bowe said. “But Andersen Corporation reacted well. We need to be able to change to keep up with the speed of change in industry.”

It was then that Andersen moved away from the mass-production model of manufacturing. The corporation no longer builds-to-stock, but rather builds-to-order.

“We focus on how we can improve and so we produce high-quality custom products versus high-quantity,” Bowe explained.

Touring Through the Plant

Andersen is an international manufacturer of doors and windows with locations across the United States, Canada, and Europe. The Menomonie plant opened in 2000 and sits on a five-acre lot, a modern but relatively small-scale plant compared to its headquarters in Bayport which covers almost 70 acres.

The Menomonie plant produces a variety of Andersen products including picture windows, transoms, and double-hung windows. They produce the hurricane-resistant A-Series, Monumental Units which consists of windows larger than 6-feet tall, and the 200 Series. Employees working on the 200 Series produce a window every 32 seconds.

“We have it down to a science,” Nevin said.

On the tour, Nevin and Bowe showed the group how a window is manufactured, explaining the assembly of each part from the sash and trim, to the flange and jamb, staining, sealing, packaging, and inspection.

Throughout the assembly, there are automated, semi-automated, and manual processes. With the implementation of more automated processes, engineers with the aptitude to keep up with the speed of change of technology will be needed to design and manufacture new systems.

“I believe we are currently using engineers for jobs that a more specialized technical workforce will need to support with the speed of industrial change,” Bowe said.

With 200 to 300 employees on the floor over a 3-shift rotation operating dozens of machines and systems, quality products are manufactured in record time.

Andersen keeps their employees’ health in mind, using a water-based stain for trim versus solvent- or petroleum-based stains. They also practice debris management and dust control for health and safety and made ergonomic improvements to workstations.

“Workstations are set vertically, so employees aren’t stooped over their product. And machines lift and move the heavy panes of glass. It’s easier on the body and safer,” Nevin said.

Andersen is making continuous improvements, innovations, and investments in learning. They are concerned with the repeatability and longevity of tools and machines in their plants. For example, after working with mainly wood products for 100 years, Andersen now uses several other materials in their windows, including Fibrex, an Andersen proprietary composite made of wood and plastic.

“After using wood for so long, we found the same tools that cut wood were not lasting as long with Fibrex,” Bowe said. “A blade that could cut hundreds of wood parts only cut a few Fibrex parts before dulling. We needed to invest in new machines, tooling, and processes for our new material.”

Fibrex has many advantages over vinyl, the material formally used.

“It has the warmth of wood and is dimensionally stable, so it’s not impacted by weather extremes,” Nevin noted. “And it’s sustainable, made of re-grinded wood from our Bayport plant and manufactured at our Northbranch plant.”

“These really are the next generation windows,” Nevin said. “And everything we do at our plant, it’s fun to see ideas implemented and work well and then pushed out to other plants across the country.”

Bradley Lorrigan, a junior in the Engineering Technology program at UW-Stout, has been on a tour of Andersen before. Being further in his program now, and having completed his co-op, he appreciated this second tour more.

“I enjoyed seeing how the flow of parts works through a large manufacturing plant like Andersen,” he said. “I appreciated seeing the applications of the classes that I am currently enrolled in on the shop floor. For instance, seeing the hydraulic systems used to raise the tables and also the interactions between moving parts on the shop floor.”

Andersen’s Menomonie plant is conducting a pilot program, introducing autonomous vehicles to their workflow. Having been in production for some time now, the Autonomous Mobile Robots (AMRs) function is to deliver parts from point A to point B, allowing an employee to continue work uninterrupted by not having to leave their station to retrieve parts.

"To my knowledge, very few manufacturers are using AMRs in a production setting,” Bowe said. “They are typically used in a laboratory or warehouse setting.”

The AMRs are programmed to follow a digital map of the plant. They can adapt the size of their footprint, finding more efficient ways to their destinations and are reactionary, stopping if their way is blocked and finding a new route to their destination.

Lorrigan was very interested in learning about Andersen's autonomous vehicles.

“This integration seems to be a growing trend for industry in the United States,” he said.

But, like any pilot program, there is still more to learn. For example, the AMRs will see a forklift in the aisle, but it cannot detect its forks if they are on the ground. It will roll over the forks and get stuck.

“Sometimes their reaction time can be a bit slow, too, causing congestion in the aisles,” Nevin said. “This can be frustrating for employees on the floor.”

To help involve employees with the implementation of the AMRs, votes were cast to name the autonomous vehicles. The Three Stooges; Moe, Larry, and Curly were selected. With their antics in the aisles, it’s easy to see why they’ve come to be known as The Stooges.

For several years now, the Menomonie plant has partnered with UW-Stout, allowing senior capstone course students the opportunity to work on real-world projects.

UW-Stout students may also seek an internship at Andersen and are given hands-on experiences in implementing the plant’s continuous improvement projects.

Andersen will typically hire 30+ interns every summer for a 12-week program in fields from marketing and supply chain to design and other technology-related careers.

“Students have the opportunity to work in basically any field offered at Andersen,” Bowe said. “This variety of experiences gives interns an idea of what they may like to do with their career, whether they have management goals or want to take a more technical path, and in return, we get an energetic workforce we can learn from as well.”

The broad range of skills learned over the course of their internship gives students the opportunity to grow no matter their background or interests.

“In this way, Andersen is an ideal place for a co-op for our Engineering Technology students and what we envision for them,” Professor Herrmann said.

Engineering Technology gives students a broad sense of how all the engineering fields interact with each other. The program gives student’s the ability to learn, adapt, and communicate.

“ET does a good job of preparing students for these things,” Lorrigan said. "It’s very important and valuable for employers who want individuals who understand all these fields.”

Bowe has received certifications, including his Six Sigma Green Belt Certificate, and has attended many mini-programs along his lines of interest in operations and management. He knows the importance of having a career goal in mind.

“But don’t plan a path to get there,” he advised. “You can have a plan today, but it could change tomorrow. There are so many options. Just don’t be complacent. Continue to work hard and prove your aptitude above others.”

“Get out of school, get a job, work for a few years,” he recommended. “Learn more about what parts of your field interest you and then see if an additional degree will benefit your career and if it’s what you want.” 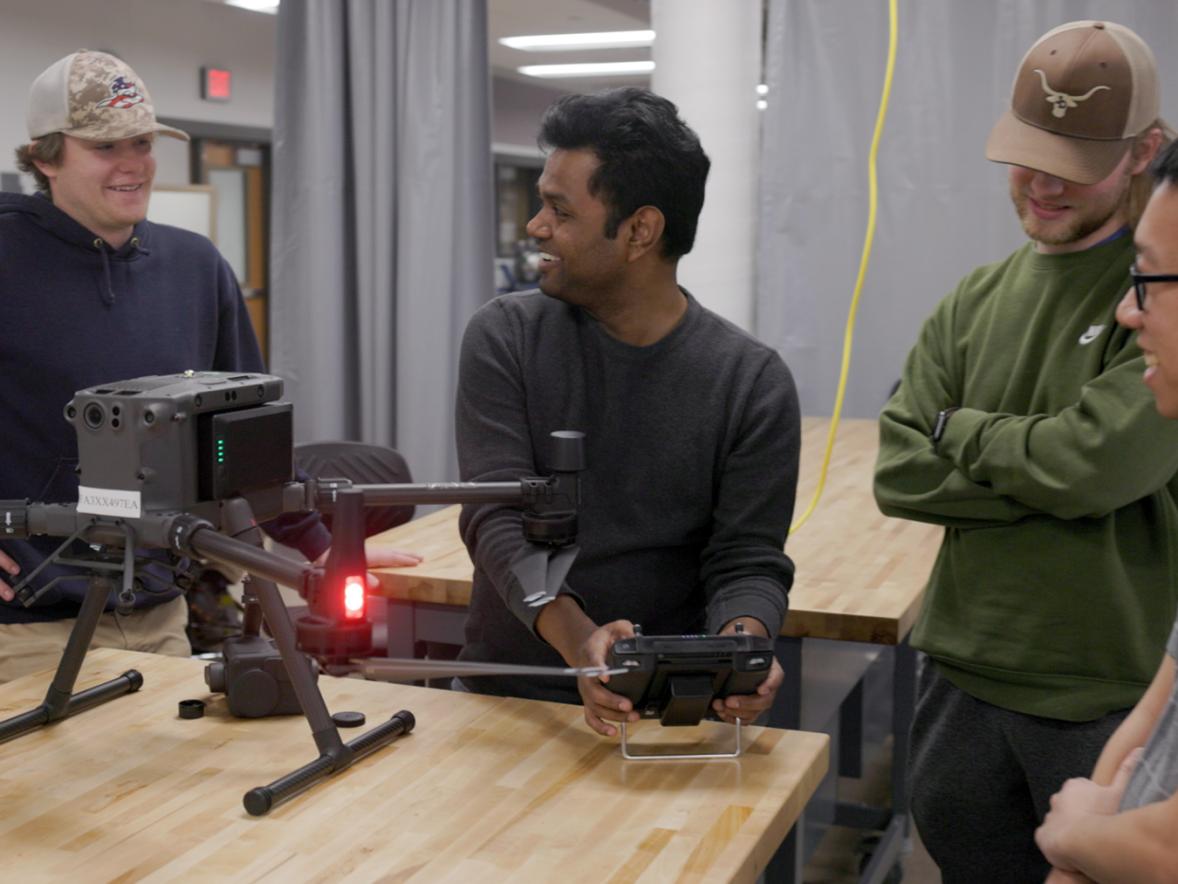 Researchers at UW-Stout will put a high-tech eye in the sky and develop a new tool to help stop and divert contaminants before they reach waterways.
May 31, 2022 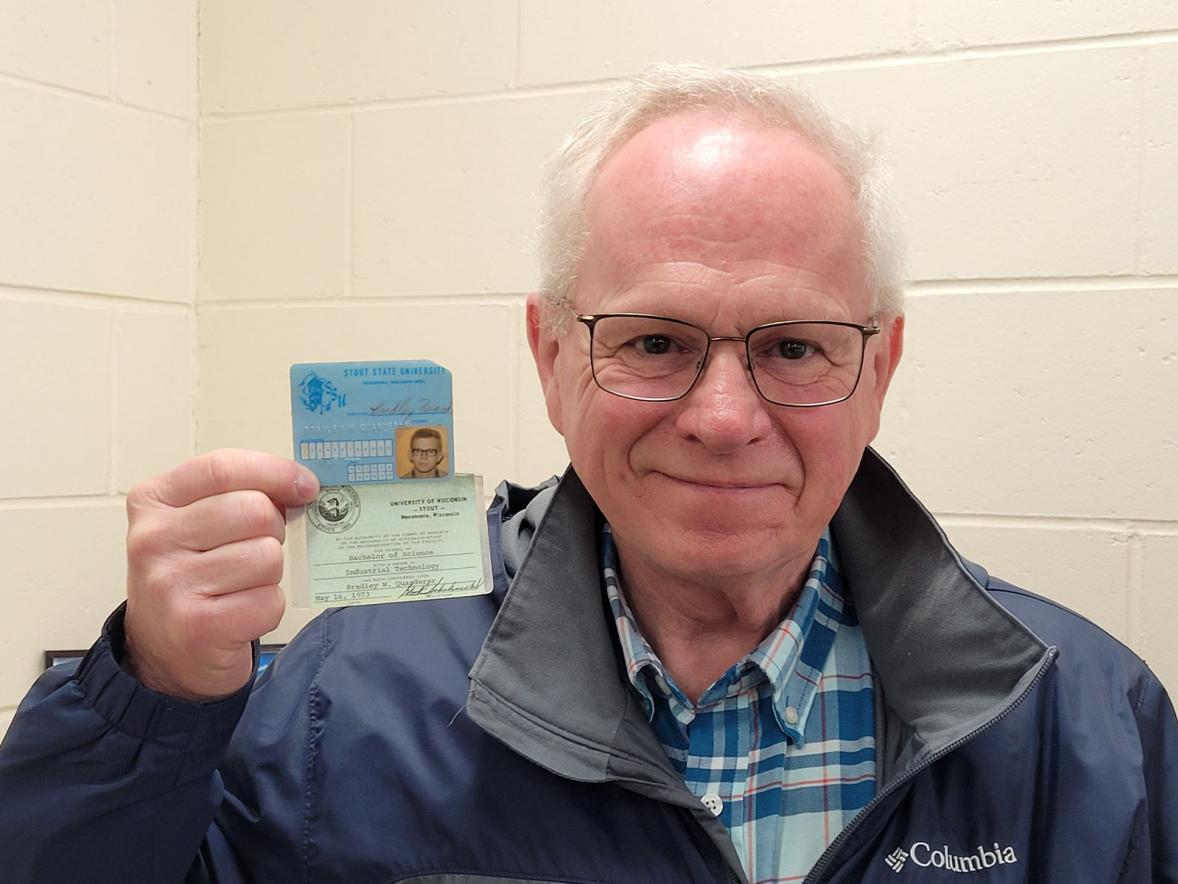 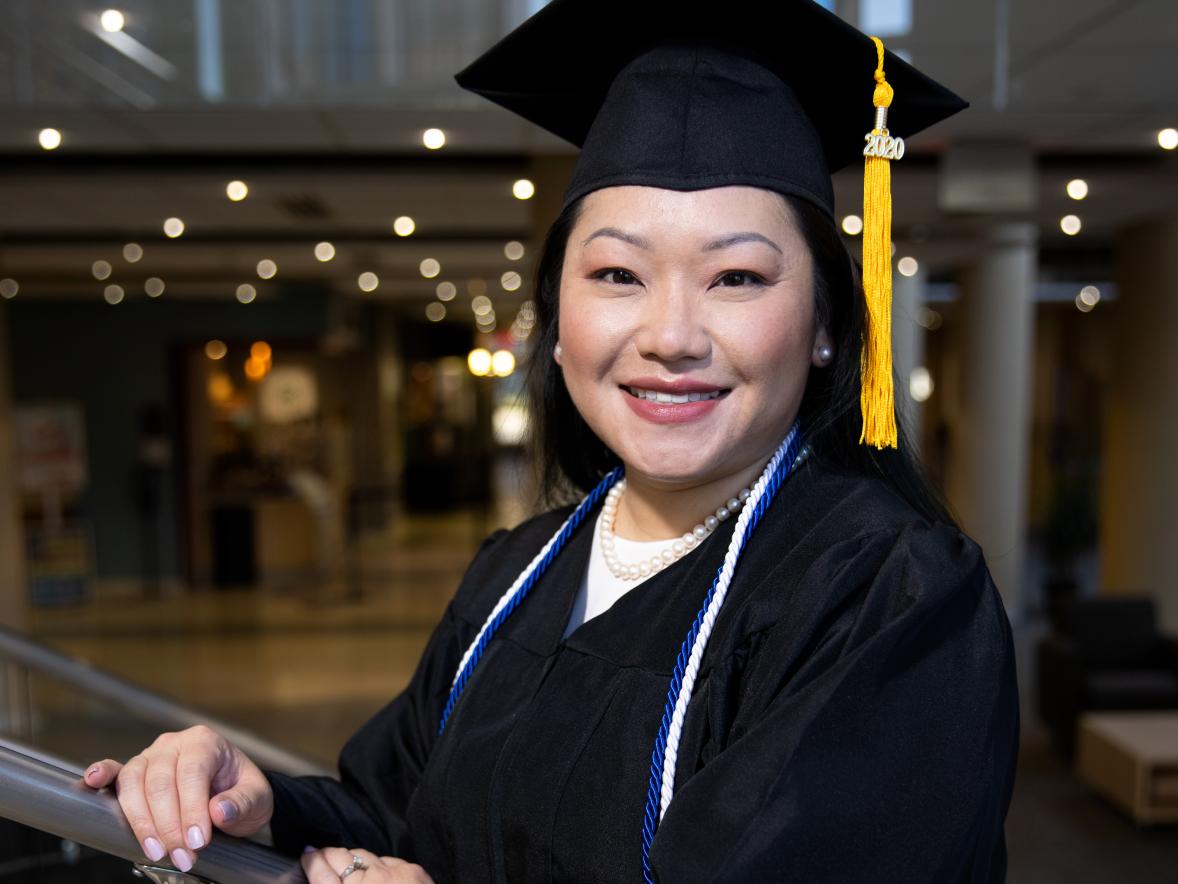 Alee Webb could have walked away and no one would have blamed her.
December 10, 2020 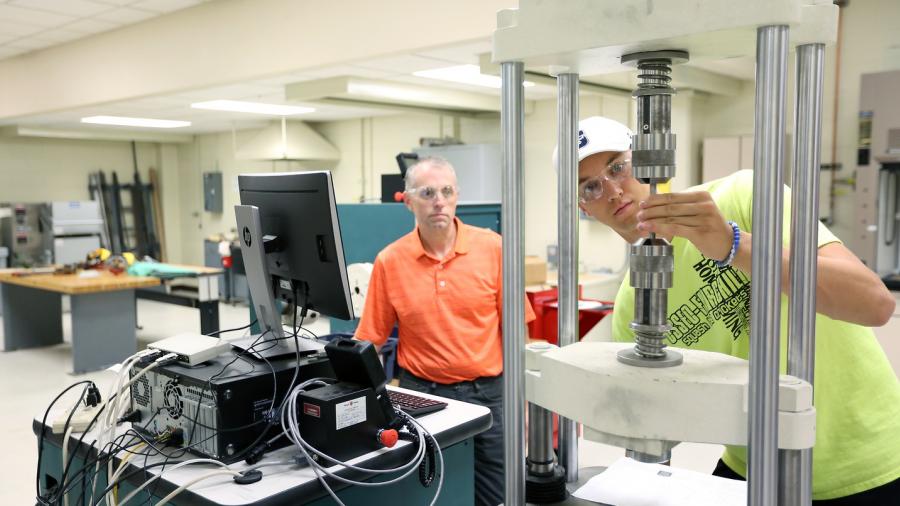 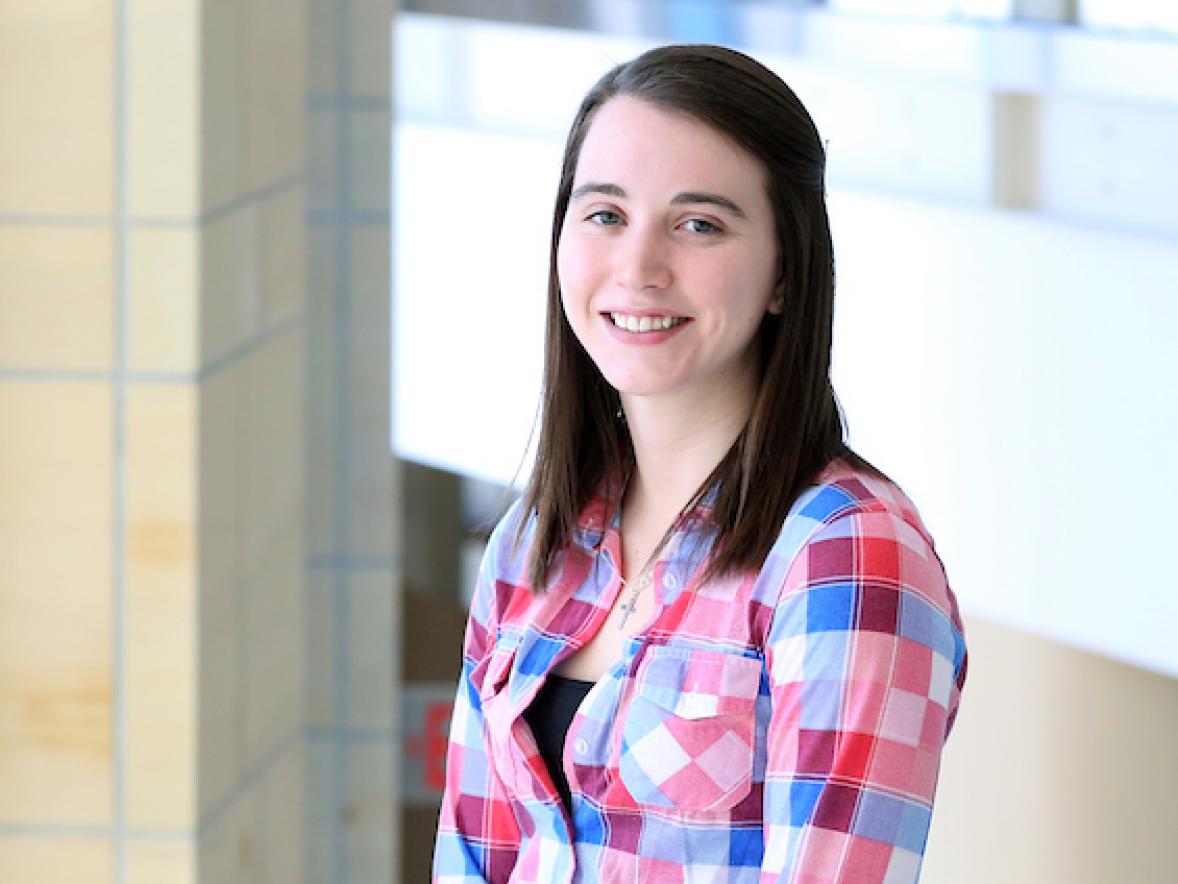 I knew I wanted to do engineering because I really liked math, and I was told that mechanical and manufacturing would be a little bit more theoretical.
Continue Reading 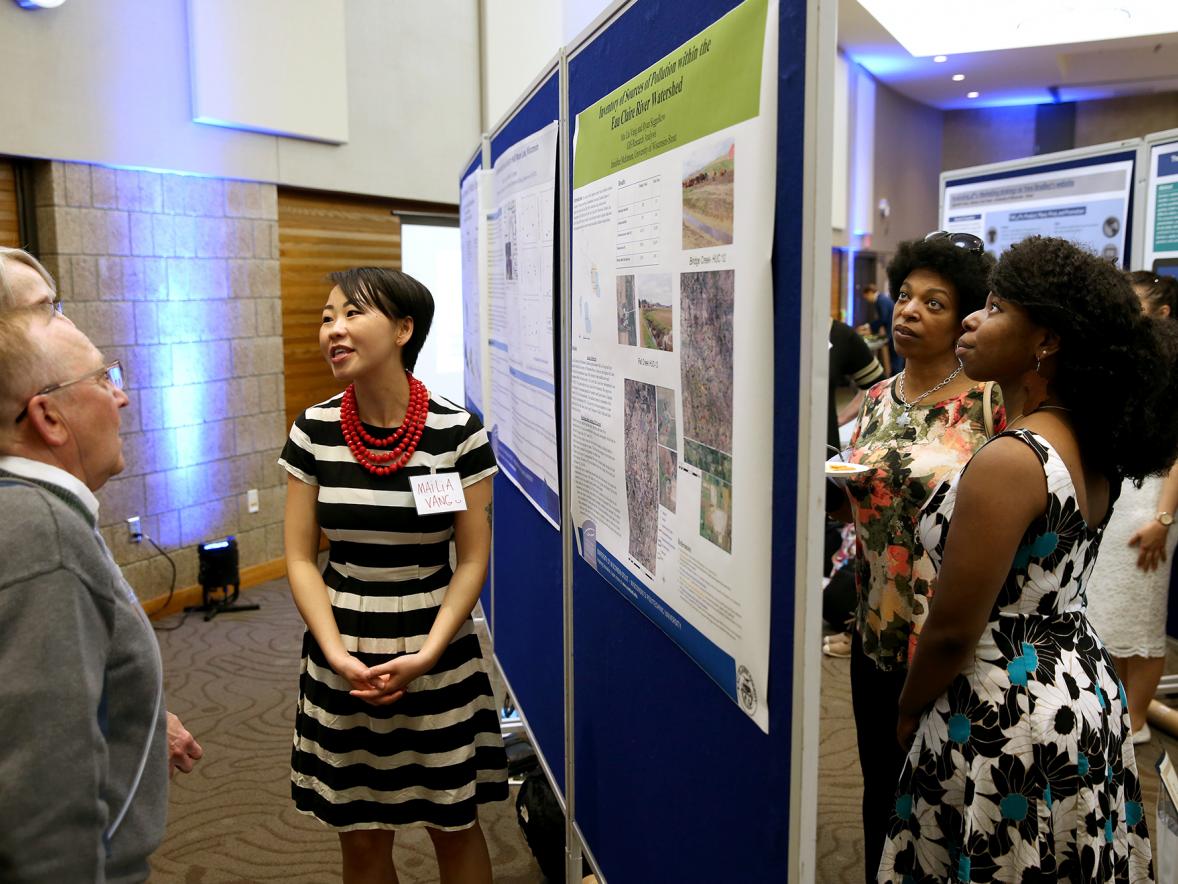 For those unable to discern between hot and cold temperatures, scalds and frozen extremities are a danger.
Continue Reading